Sally Fitch: Coats of Many Colors 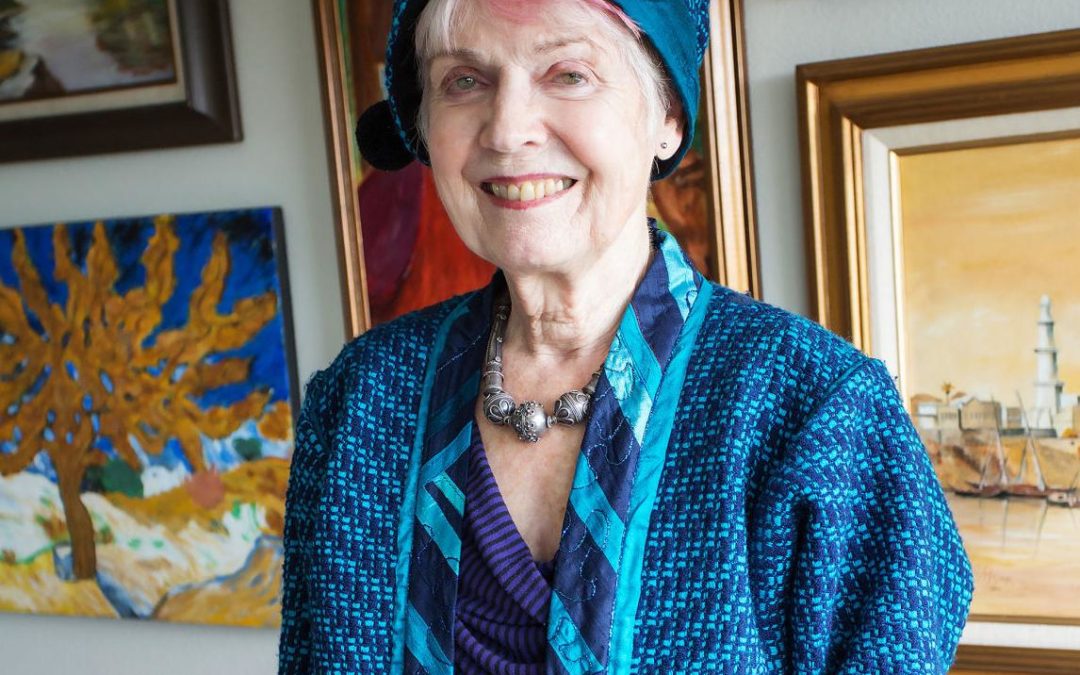 With a limited knowledge of art, I approached the assignment to write a story about a Yakima artist as a blank canvas, as whole cloth waiting for the first cut. The assignment turned into a series of stories and I have been privileged to meet some highly talented and interesting locals. The workmanship I have witnessed! It has been inspiring, brilliant, sometimes breathtaking. I felt I might be getting a handle on the genre, so with my latest assignment I looked forward to that insider’s view of more beautiful artistry. Then I met Sally Fitch and found pieces of humanity hanging on mannequins in her lovely West Valley home.

As a fabric artist extraordinaire, the home she shares with husband Jim is a museum of handicraft from every corner of the world. Her work is known locally because it has been exhibited, written about and sold in the Valley for years. But also because she is her own best canvas. Fitch can often be seen wearing her creations, with favorite pieces including sets of blouse, jacket, and pants sewn from the best fabrics and incorporating swatches or adornments from Peru, Myanmar, Egypt or Vietnam.

She specializes in wearable textiles that are interchangeable, often reversible or with removable sleeves. Fitch begins with the best fabrics and usually incorporates traditional or cultural pieces made by women in remote villages from China to Chile. The pieces are travel souvenirs from the regions the Fitches lived in while Jim was an agricultural economist working for the Ford Foundation as well as their years with the Peace Corps. They still often travel for leisure and Fitch finds staying in the villages where women are creating exquisite fabrics and handiwork to be “an incredible experience.” She also views her purchases as a way to support women, to help preserve a historical record of their cultures, and as a journal of her travels. She never considers language a barrier because “working with your hands is a means of communication.”

“It has been a great way to get to know women — their art, their lives, their creations,” Fitch said. “Often the women spend the day working in fields and caring for children and then they get to their traditional arts.” Fitch did point out she believes that, just as in America, technology is rapidly changing societies around the world.

“Young girls are all moving towards technology and away from the crafts,” Fitch said. “I think email is probably more exciting.” After a downturn in popularity of sewing and handcrafts here, Fitch said she sees resurgence in interest in several areas, specifically quilting and knitting.

“Mostly gone are the days when kids learned to sew at a 4-H meeting or knit from a grandmother. But now some younger folks learn from a YouTube instructional video,” she said. When asked to look into a crystal ball regarding the future of fabric arts, Fitch said it seems to her this is a period of transition.

“The world is opening up so fast and yet closing down as well,” she said. “Through media and the internet, ordinary people do see what other ordinary peoples’ artistic beauty is. When I wear my pieces, strangers will approach me to ask about them. At the same time, there is an entrenchment. People are more personally isolated from one another and it is also more difficult to source materials locally. At the few local fabric stores that remain, there may not be enough staff for them to spend the time they used to answering questions about fiber and sewing,” she said.

However, according to Fitch, there remains “an incredible appreciation for the classic textiles.”  “People love older, rich, beautifully done work,” she said. “I think the world is becoming more aware and more appreciative of the places these things are made. Partly because of media and the internet. And because there also wonderful museums focusing on these regions,” she said.

One such museum, the Burke Museum of Natural History and Culture in Seattle, recently sought Fitch’s expertise to help create a new display.

“They have started a Guatemalan collection and approached me to help,” Fitch said. “They are putting together pieces of clothing from the same village over time to study the evolution of garment styles. I contributed 12 beautiful outfits from different villages. It’s a paradise for fabric there.”

Fitch’s own collections serve as a historical exhibit and she is dedicated to sharing her knowledge.

As a young, newly-married couple, the Fitches traveled seven hours in the back of a truck and two hours by donkey to their “honeymoon suite” (a dirt-floor hut) in the Atacama Desert of northern Chile where they served with the Peace Corps. Those years ignited Fitch’s passion for the sense of community she found in women in villages everywhere.

While teaching in Yakima, she was the recipient of several fellowship grants that allowed her to travel extensively to study culture and history in Pakistan; Mayan culture and traditions in Guatemala; and the Inca civilization. Besides her students, Fitch has also shared her knowledge and treasures with audiences through the Yakima Valley Museum, the Central Washington State Fair and a blog she wrote for a decade.

Fitch still travels and continues to buy fabrics, but said it is becoming even more difficult to find quality fabrics in other countries. Which means online sources are becoming more important. It has become one of the two sources Fitch relies on the most for her materials. The other reaches into the past.

“Some of the best treasures are at thrift stores,” she said. “I find gorgeous quality items from fabrics to ornamentation such as closures. And flannel — it’s where I find the best flannel!”

Like most fabric artists, Fitch relies a great deal on the feel of cloth. That creates a snag when buying over the internet.

“You learn to ask the right questions,” she explained. “There are hundreds of sources so reviews become important. And places like the annual Sewing & Stichery Expo at the Puyallup fairgrounds are valuable sources of information as well,” she said.

Fitch explained that she likes to find a reliable source and stick with it. One of her favorite “locals” is Marcy Tilton from Oregon.

Whether it was teaching Chilean history and folk dancing at a girls school in South America or history and Spanish at one of Yakima’s high schools, the retired educator was always creative in her classroom. She loved to use her treasures, both purchased and made by her, to bring a culture to life for students. And education is also changing the lives of women worldwide, according to Fitch.

“Their lives are becoming more enriched and women are becoming more vocal and more a part of their community,” she said. “It’s an uneven shift, changing more rapidly in some areas than others, but it is happening.”

Man or woman, young or old, art expert or novice, it is difficult not to be struck by the vibrancy and uniqueness of Sally Fitch’s textile artwork. The pieces featured on her profile on YakimaArt.com, while beautiful, can’t truly do justice to the true beauty of her wearable art. But I recommend you click through the photos of “Nomad Sally” anyway. It is a social studies lesson and a glimpse into museum-quality treasures you might one day see wrapped around some of Yakima’s most interesting women.